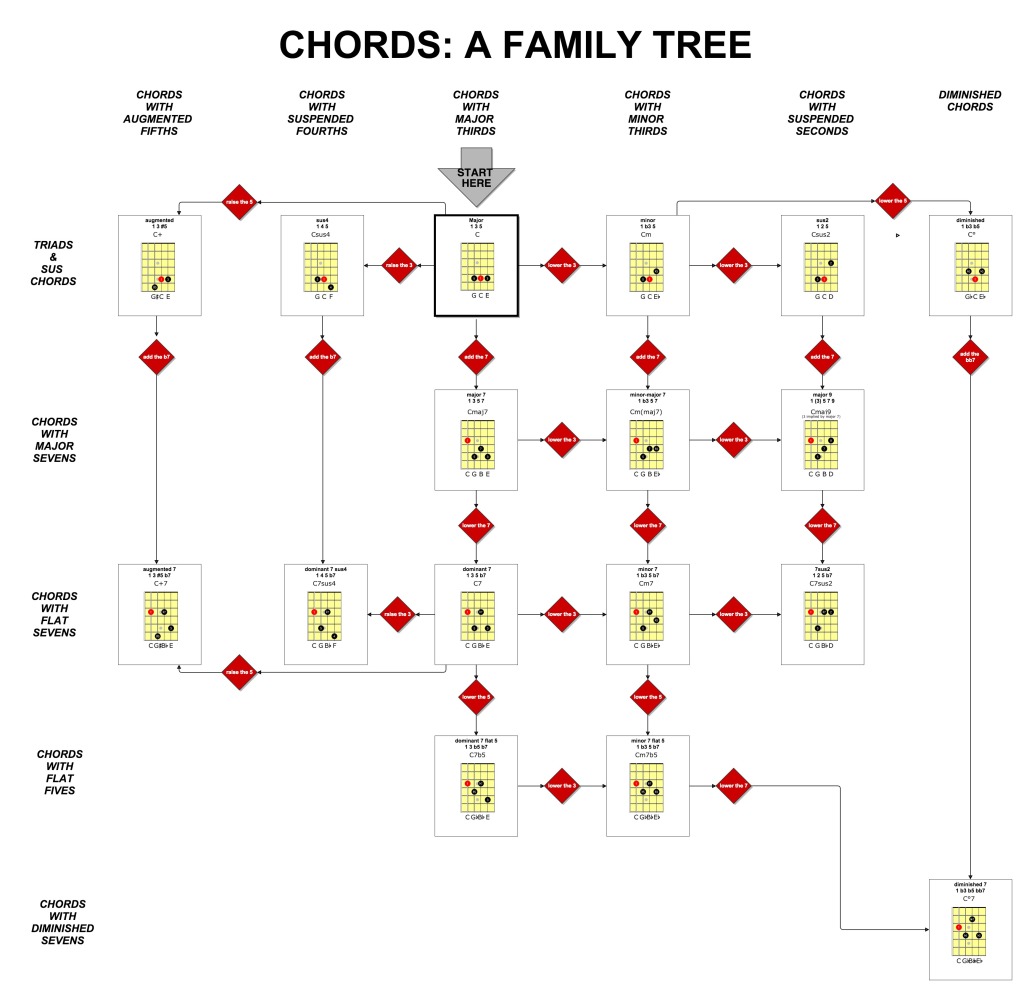 If you’re already signed up for our GuitarOS: Practical Theory course, you’ll be getting this chart at the end of Chord Building.

But I thought it might be fun, useful, and instructive for those of you approaching this on your own to have a look at how chords are related.

In classical French cooking, there are five “mother sauces”––sauces that are the head of their own little family of sauces. They can be used as they are, or they can be added to & altered to make other sauces––their “daughters.”

The five mother sauces––Bechamel, Veloute, Espagnole, Hollandaise, & Tomate––can be turned into a dizzying array of other sauces. For example:

Thinking About Chords As Mother Sauces

The major chord is the reigning matriarch of music. In the Chord Building portion of GuitarOS, we introduced the twin rules of

Treat each chord as the center of its own universe

We use the major scale as our measuring stick.

This means that every single chord, from simple cowboy chords like G, to panic-inducing jazzy monstrosities like Ab#5b9/Gb, is thought of & talked about in terms of the basic major scale and major chord.

If we approach this from the other direction, we could say that

From the basic major triad, we can build all the chords.

Which Is Exactly What We’re Going To Do

This chart is a family tree of sorts.

It lets you see how chords are related, and how closely or distantly.

It also groups them according to some of their more obvious characteristics: chords with flat sevens, or chords with minor thirds.

You’ll Notice That There Are Some Holes In This Chart

This is because some chords, although theoretically correct and physically possible on guitar, are so rare it’s hardly worth your time to study them.

One of my many, many beefs with traditional instructional materials is their completely warped priorities.

I’m trying to engineer epiphanies for you.

If leaving out some super rare things you’ll never see in the real world helps you understand the things you that you will see, then that’s what I’m going to do.

It also means that in a handful of instances, I’ve used a less-detailed explanation where the 100%-technically-correct-according-to-music-school-theory-books explanation is unwieldy and counterproductive*.

Here is the chart as a PDF

Or just click it to view in your browser.

Either way, get ready to zoom in and out a lot.

Get your hands dirty.

Mess around with this stuff.

Learn the names of the notes.

Internalize which ones belong together in which keys.

Figure out how chords are built.

*Most people should skip this––it’s just me preemptively defending my choices to the haters of the world.
1. I know that the theoretically correct way to describe a sus2 or sus4 is not as a “lowered minor third” or “raised major third” (respectively), but rather as chords with twos and/or fours in lieu of the third, which are thus neither major nor minor. But I’m trying to explain relationships between chords to guitarists, who predominantly use a shape-based approach to understanding guitar. This gets covered properly in the chord building course, so relax.
2. Yes, you’re technically right––a chord spelled 1 5 7 9 isn’t technically a maj9, but… c’mon. Again, covering what’s useful > being 100% music school correct.
3. Yes, I left out things like maj7#5. Too rare for most people to bother studying, and––if you’ve spent some time studying the rest of it––completely obvious how to play should the need arise.