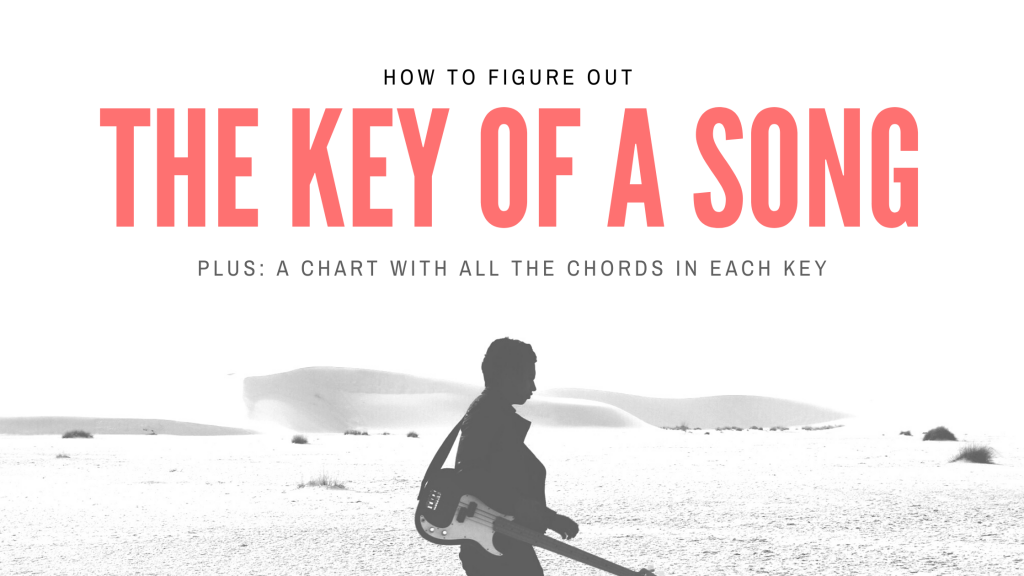 In GuitarOS: Practical Theory, we walk you through:

But I get it—today you’re in a hurry and you want to know:

How do I figure out the key of a song?

Here’s a list of questions that will help you decide.

Although putting this in a checklist makes it seem really formal, this is something that will eventually happen automatically, in a matter of seconds.

I trained my brain to do this, and you can too.

With a little practice you’ll be able to take a snap “reading” of a song (or a section of a song).

Grab the printable PDF chart with every chord in each key

I’m going to explain each of these in order, but I want to begin by saying that you should be going through this checklist in this order when trying to determine a song’s key.

1. Is there a chart with a key signature?

Probably the easiest way to determine what key you’re in is when the written music tells you the key.

On a chart written by a literate musician, there will be key signature—some number of sharps or flats between the clef and the time signature: 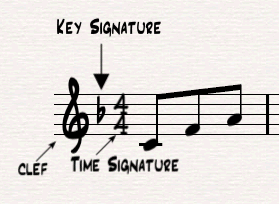 In this example, one flat means that the song is in F. 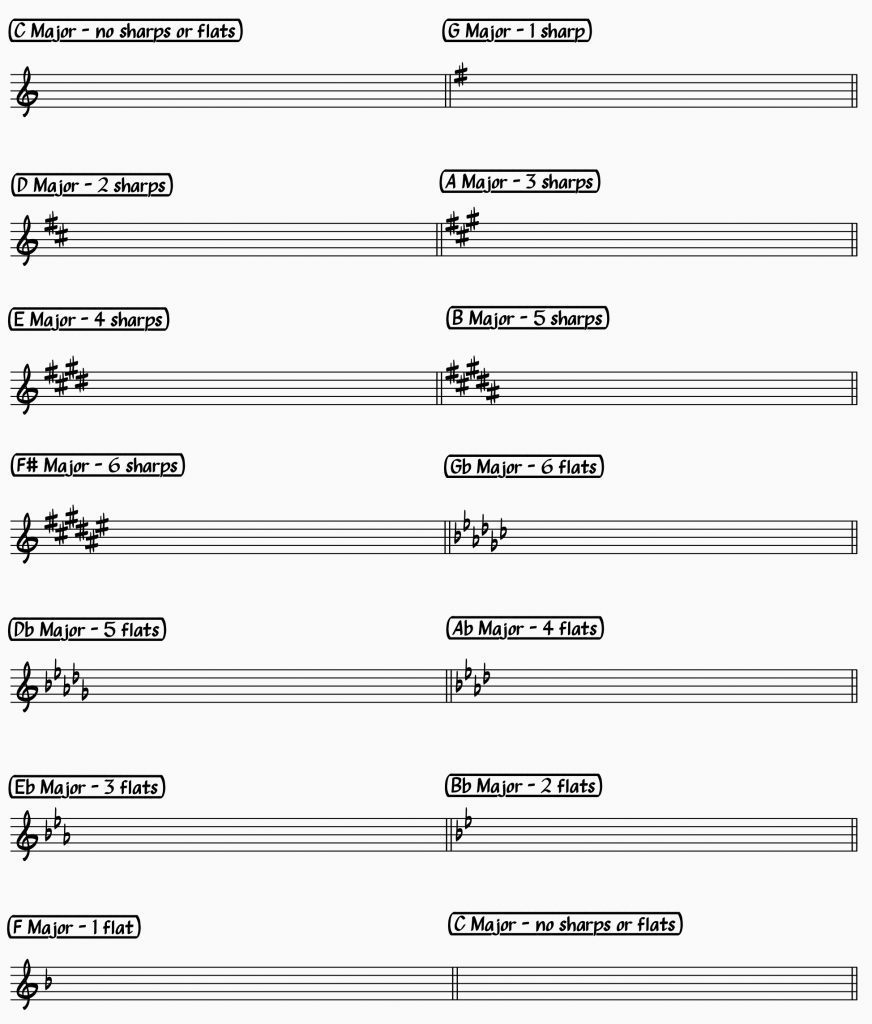 Of course, if someone says, “this is a blues in G” or “we’re playing Dock of the Bay, but in F,” you’ll obviously know what to do.

3. What are the first & last chords in the song?

If you’re learning a song from a recording, or reading a chart written by a less-than-literate musician, you can look at the first & last chords of the song—they’re frequently the I chord.

It’s not a hard and fast rule though. Some common exceptions: 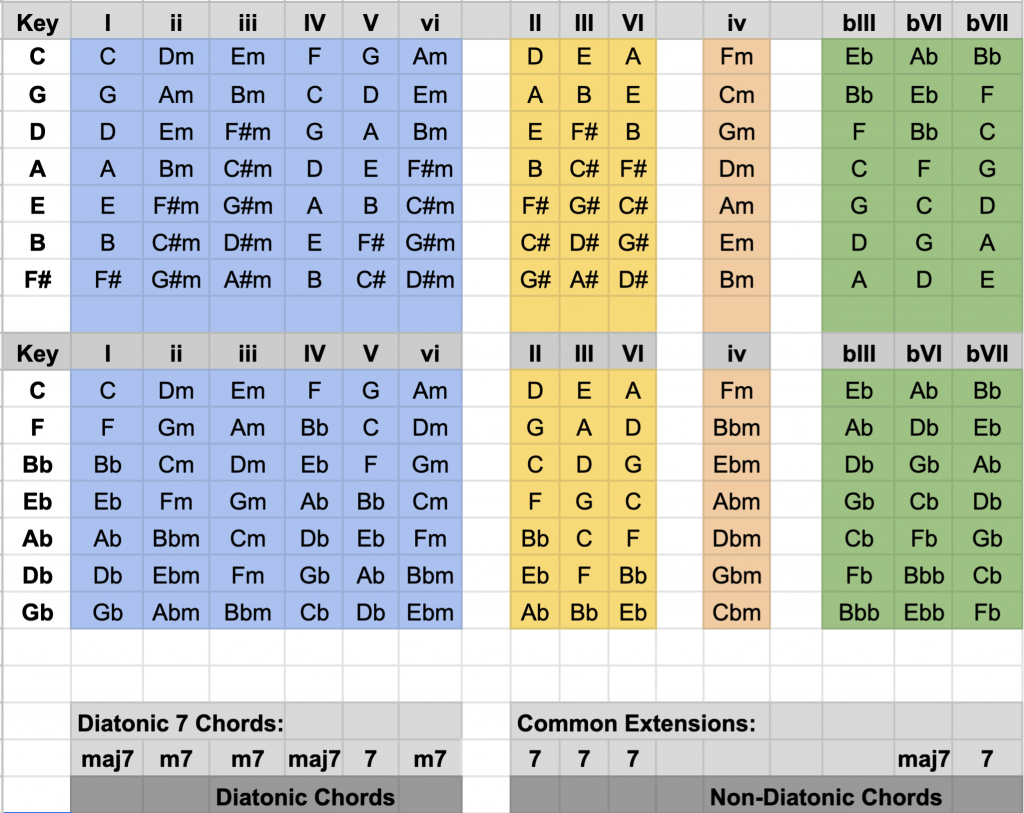 for a printable PDF of this chart, click here

4. Is there a clear dominant chord?

If we look at the extended chords that show up diatonically (diatonic = made up of only notes from within the key), we see that there’s only one that’s a dominant 7 chord: the V.

If you see a set of chords that only has one dominant 7 among them, there’s a pretty good chance that that chord is the V.

5. Is there another clear chordal movement that’s a key giveaway?

You can also be on the lookout for other mini-progressions like ii-V or IV-iv.

6. Are all the chords diatonic to a certain key?

(Again, “diatonic” = only using notes from within the key—no outside notes.)

If you see this progression:

…you can see that the only key that has all of those chords diatonically is G: 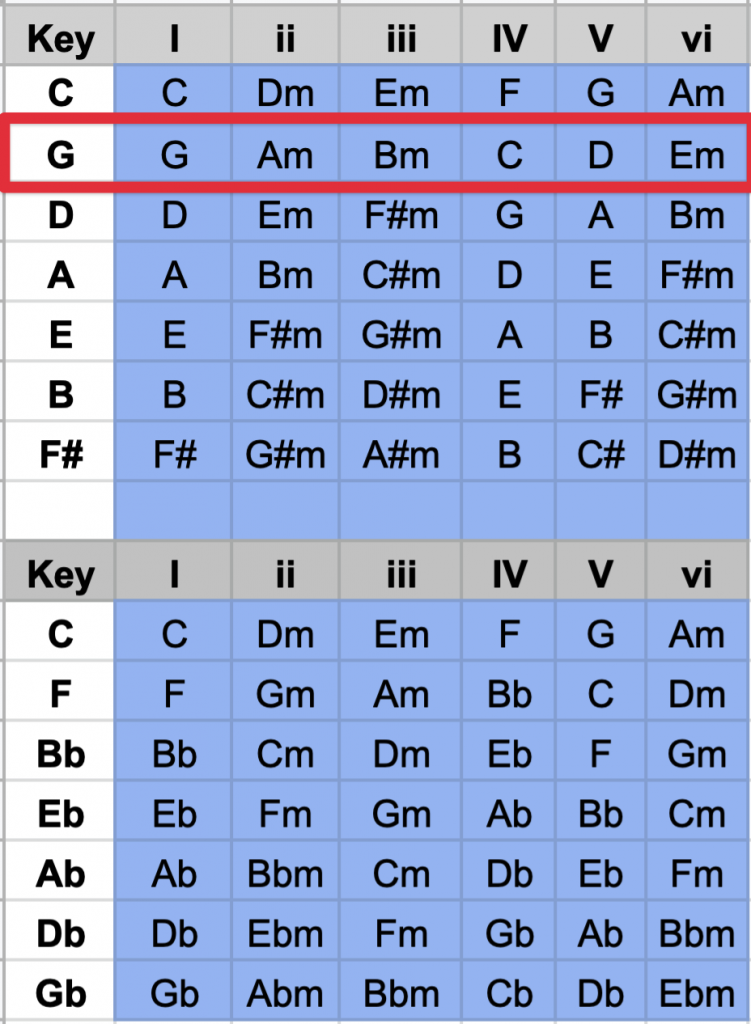 So even though there’s no G chord, it’s in the key of G.

(This example is from Dave Matthews Band’s #41. The band eventually does go to the G chord, but it takes them a minute and a half of this progression before they do.)

7. Are most of the chords diatonic to a key, with some non-diatonic (but not entirely unexpected) chords sprinkled in?

Here are the chords from John Mayer’s Badge & Gun:

All of the chords are diatonic to G… except that A7 in measure 6.

But when we look at the commonly-occurring non-diatonic chords, we see that A7 isn’t entirely unexpected: 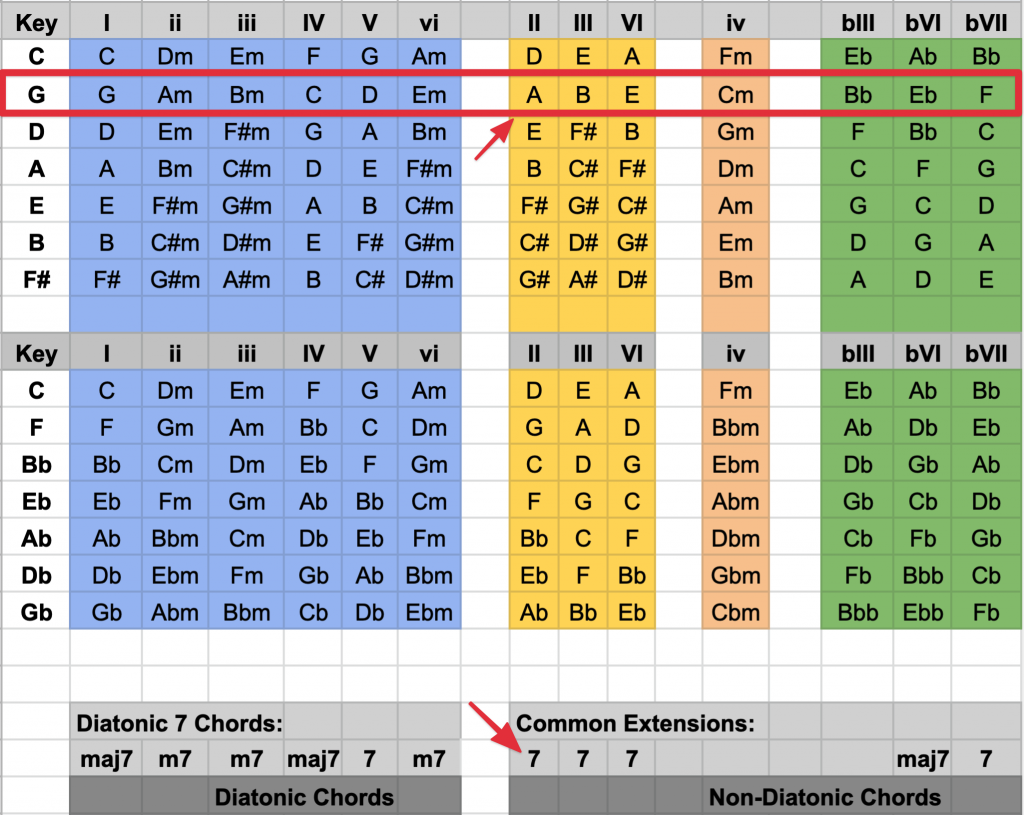 8. Can this be written in more than one key? 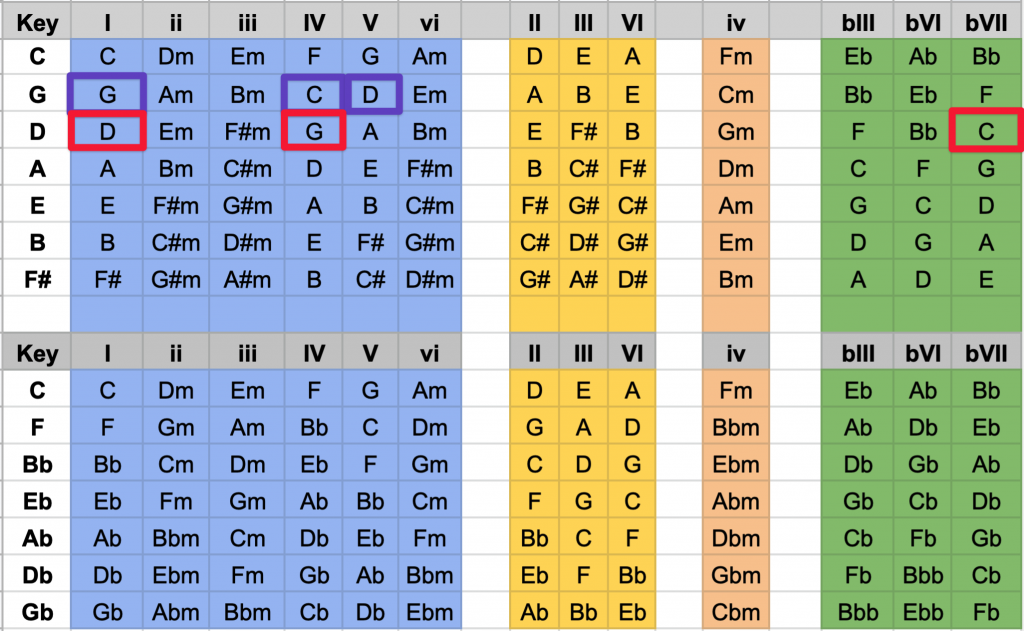 If you do a google image search for “Sweet Home Alabama sheet music,” you’ll see that roughly half of the transcriptions show it in D, and half in G.

9. Is one easier than the other?

My personal preference is to think of Sweet Home Alabama in G, because it’s easier that way.

But thinking of it in D is just as correct.

I have another post examining the implications of this idea, and what it means for modes.

10. Does it even make sense to think of this as being in one key?

For some tunes, it doesn’t really make sense to think of them in one single key.

Although we don’t leave the key long enough to warrant writing in a key change, for measures 11 & 12 we’re very clearly playing I-ii-iii-IV in the key of A.

If you were soloing over these changes, the E major scale that sounded so good over the rest of it suddenly doesn’t fit quite right—you have to smoothly switch to A major for those two bars.

Jazz music is filled to the brim with this sort of thing—there’s ii-V-I, and then I becomes minor and it’s the ii of some other key…

Jazz musicians still use this same roman numeral language, but they’re not beholden to whatever key is written on the chart—they’re talking about what key the song is in for this subsection of the tune.

We’re going to touch on this again next week when we talk about how all of this feeds into our understanding of modes.

What About Minor Keys?

It’s worth mentioning that up until now we have studiously avoided talking about minor keys—keys where the “one chord” is minor: i.

Minor keys are their own thing, and worthy of their own article (which we’ll get into in two weeks, after our discussion of modes).

See you next week, when we’ll talk about what all of this means for modes.