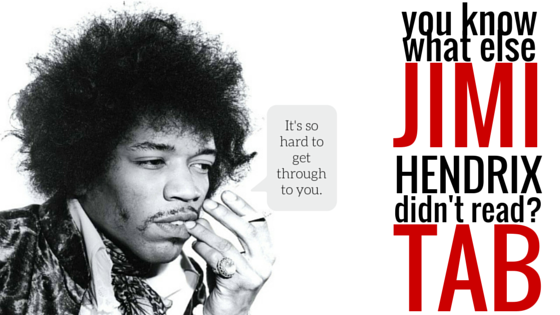 There’s a story about Jimi:

He’s hanging out with Miles Davis, and Miles says something about a diminished chord.

Jimi says he doesn’t know what a diminished chord is, so Miles plays him one on the piano.

Right away Jimi says, “oh you mean chords that sound like this?” and proceeds to play them all over the neck.

I love these sorts of behind-the-music stories, but I kind of hate this one.

Partially because it’s only half true, and also because it completely misses the point.

For a few years now, I’ve been ranting and raving about the idea that guitar instruction is hopelessly broken, mired in a shape-based methodology that is holding us all back.

Week after week I’ve mounted my soapbox and prattled on about this one idea: that learning guitar as a real instrument is both easier than you think and––if you’re trying to be badass at it––easier than the standard shape-centric way we all learned it.

And every time I say that, someone chimes in with the same tired comment:

Yeah, and Django out-guitared us all with two mangled fingers but I don’t see any of you pulling out a meat cleaver and a cutting board.

Even though Guitar As A Real Instrument and reading music aren’t the same thing,  I still want to talk about how ridiculous the Jimi-didn’t-read argument is.

In no particular order…

If you’re a visionary creative genius like Hendrix, by all means keep doing what you’re doing, and we’ll all work around whatever limitations you may have.

But since you’re reading about how to play better guitar on the internet, I’m guessing that you are not in possession of Jimi-level brilliance.

Are you avoiding those things too, and hiding behind the justification that if Jimi didn’t need them then neither do you?

(Oh, and that whole thing about tablature predating modern notation? I tracked down some players who’ve been in the game awhile and asked them when they remember tab hitting the scene. According to my dad’s childhood guitar teacher, Jimi was already a superstar when the very first guitar tab book hit in the late 60s. According to my new friend Brian Turner, tab as we know it didn’t become widespread until Guitar For The Practicing Musician hit newsstands in 1983.)

Post hoc, ergo propter hoc is the name of a common logical fallacy––that because A precedes B, A must then be the cause of B.

Correlation is not causation. And besides…

“What makes sense for me given my unique circumstances?” is a much better one.

If you just want to noodle around on a guitar once in a while then sure, TAB and lyric sheets are perfectly fine for you.

But if you want to be a badass guitarist,  why would you deliberately deprive yourself of a system for understanding music that’s been tested & refined over centuries and is used by badasses everywhere?

If Jimi had the same access to information that you do, he would be way hungrier than you.

I’ve got a lot more to learn about music.” -Jimi Hendrix

Not just more, but a lot more.

Not just about guitar, but about music.

At the time of his death, he had been sponging up music theory from Miles Davis, incorporating it into his songs, and trying to learn about arranging.

I want a big band full of competent musicians that I can conduct and write for. I don’t want to be playing as much guitar. I want other musicians to play my stuff. I want to be a good writer.” – Jimi Hendrix

The contents of your kitchen junk drawer would be an unimaginable trove of wonders to a caveman, and with it he would be the most successful caveman who ever lived.

Similarly, if Jimi had our access to Google, Amazon, and interlibrary loan, I find it hard to imagine that he wouldn’t use it to let his curiosity run wild.

#6 If Jimi were on the scene today, he would read more music than you do.

Hear me out on this one.

Before he was Jimi Hendrix, he was James Marshall Hendrix, a crazy talented guitarist trying to make his living playing music.

Before he could be the icon who changed the way we think about guitar, he had to keep playing music, keep making connections, and not starve to death doing it.

So he did what people in his situation often do: he jobbed.

Jobbing – verb. Playing music for money. Because getting paid to play music is a fuck of a lot better than having a job, even when it’s not your favorite music.

Know what they all have in common? They were hired guns before they were stars in their own right.

Did he need to read music to play those gigs?

Apparently not, because he didn’t.

But if he were coming up in this day and age? Trying to string together enough gigs? Trying to meet enough of the right people? Trying not starve in the process?

The jobbing gigs he would take would require him to read charts.

Although it’s not exactly obvious from the outside, charts are how modern bands work. And it’s getting more and more like that all the time.

If he was still alive today (or if he had been born 50 years later), Jimi would be a better reader than you.

Either in service of taking jobbing gigs before he hit it big, or in service of writing charts for his big band, he would be more of a reader than you are today.

Assuming that what worked for Hendrix in the 60s will work for you today is intellectually dishonest. You’re bullshitting yourself because reading seems scary.

But it doesn’t need to be.

Why We’re All So Averse To Reading

There are four big reasons why guitarists are scared of reading music.

Let’s look at each of them in turn and see if they stand up as legitimate reasons to avoid reading.

Yes, reading music for guitar can be really hard. On a 24 fret guitar, you can find this note in nine different places on the neck.

But once again, we’re asking the wrong questions. Instead of “is this harder for us than for others?” or “wouldn’t it be easier to use TAB?,” we ought to be asking,

“Is it worth it for me to learn to read?”

If you just want to sing songs around the campfire or start a midlife crisis blues band, then by all means: skip learning guitar like a real instrument. It’s not going to pay off for you.

But if you’re wondering why you haven’t gotten much better in the last few years, if you want to continue growing as a guitarist, if you want to be a badass… then learning Guitar As A Real Instrument is actually EASIER than what you’re doing now. 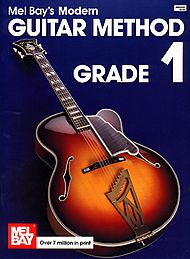 …or the panicked “black ink-itis” feeling you get when you see something like this: 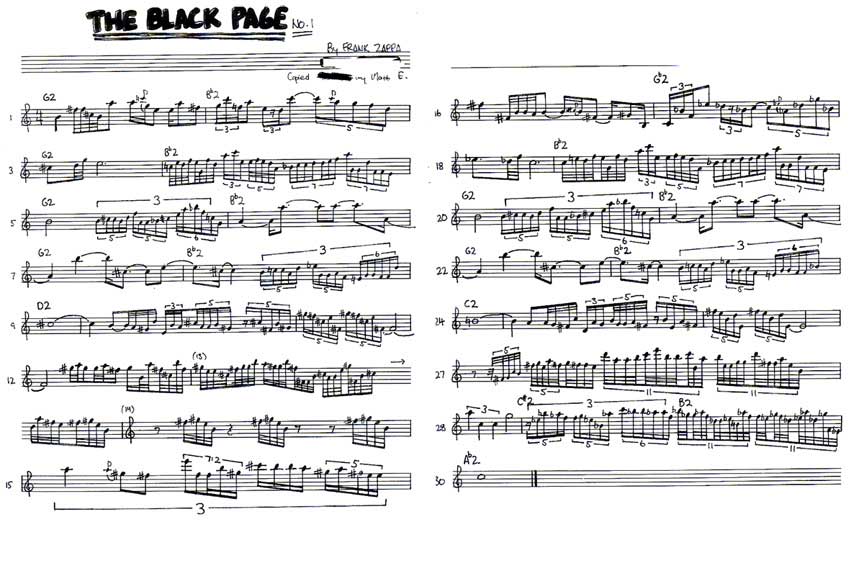 And true, those are both “reading music.”

But “reading music” isn’t one thing, it’s a spectrum.

Professional guitarists who are busy getting paid to play music have a little secret that they’re not letting you in on:

Most of the time you’re “reading music” for guitar, it’s more like this… 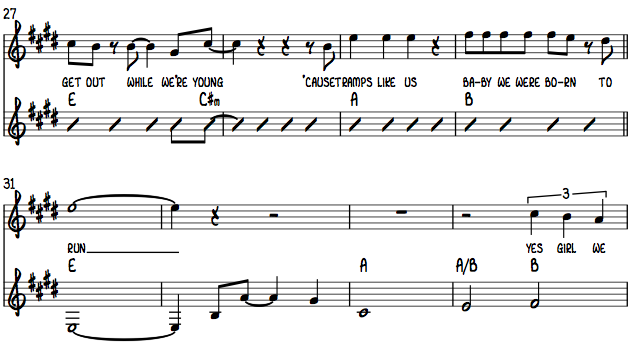 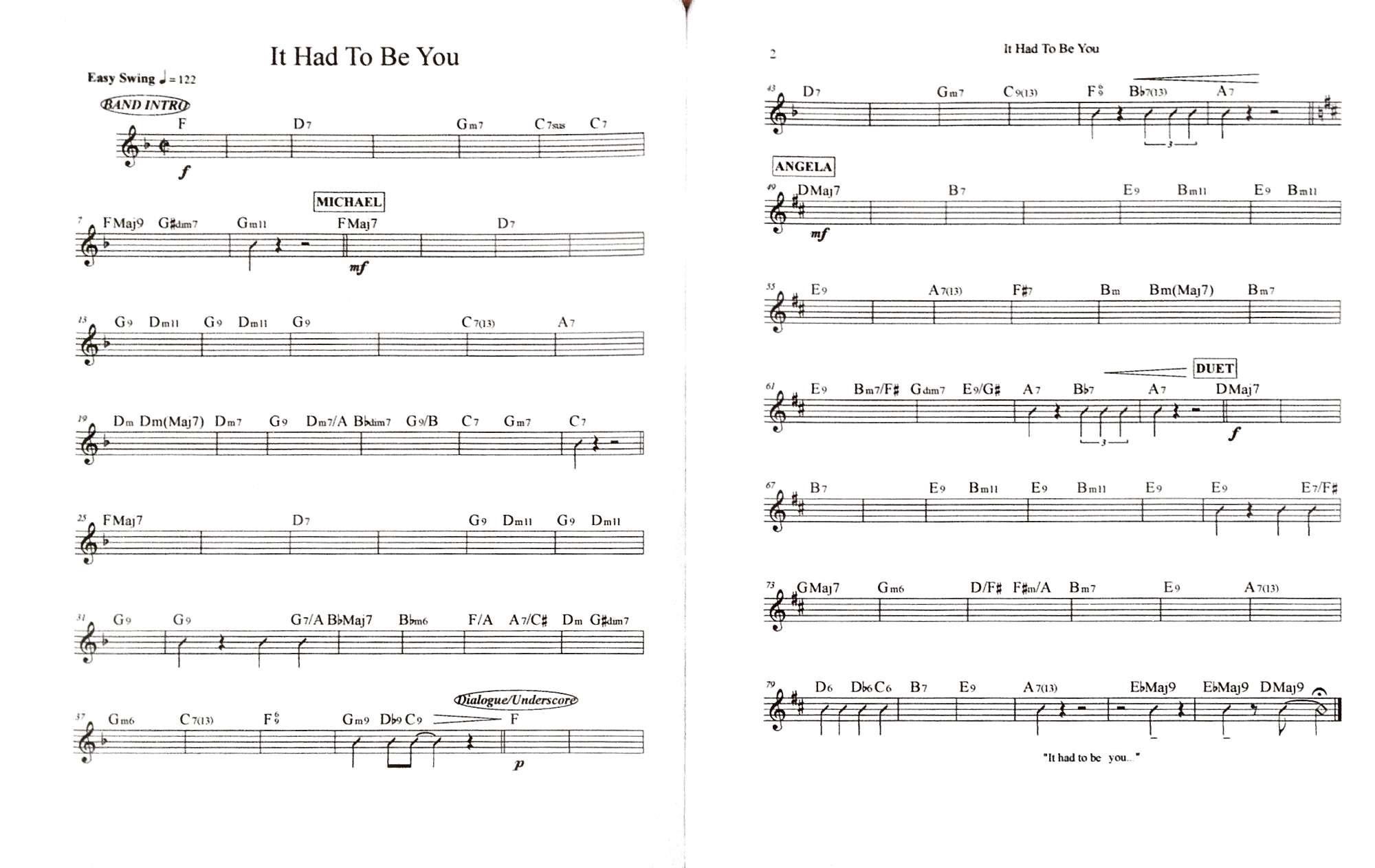 …but rarely are you asked to sightread that in real time. If it’s that difficult, you’ll probably get the chart ahead of time.

3. The Value Is Unclear

Blame the But-Jimi-Didn’t-Read crowd. They’re so busy plugging their ears, putting their blinders on, and willfully ignoring the changing tide that they didn’t get the memo.

Chances are equally good that the really-good-but-musically-illiterate guitarist never even hears about the gig in the first place.

Which of course perpetuates the problem.

The only guitarists who are visible to us are the rock stars. Rock stars are less likely to be readers than sidemen. So we ignore the myriad perennially successful sidemen and focus on what the very few rockstars are (sporadically) doing.

It’s a little like being afraid to fly, but not wearing seat belts in cars.

It’s not your fault. 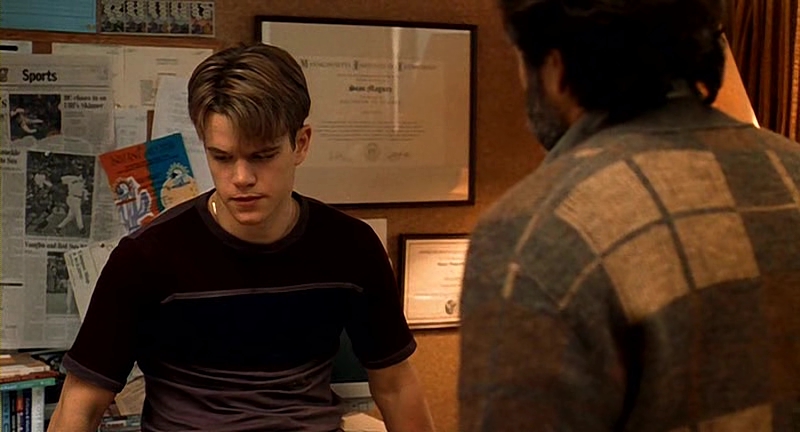 Is it any wonder that––given the choice––we go with learning our favorite songs over reading our way through the positively archaic Mel Bay 1?

For most of the guitar’s reign as the most popular instrument on earth, the resources for learning it like a real instrument have sucked.

The players who managed to suffer through the boring stuff (and who could play) were rewarded lavishly. There are a tiny handful of studio bands who are responsible for a freakishly large percentage of history’s best recorded music.

While the opportunity to play in one of those bands is long since passed, the news is still good:

You live in a time when the resources to learn Guitar As A Real Instrument are readily available and no longer suck. And doing so is illegible enough to most players that the rewards are still outsized.

It’s a goldrush. The sooner you get there, the more you win.

In ten years every half-serious guitarist will be a reader, and every good gig will require some reading chops. It’s just illegible enough now (and the methods so much better) that there’s never been a better time.

Whether you’re on the front end of this wave or you’re left behind is up to you. 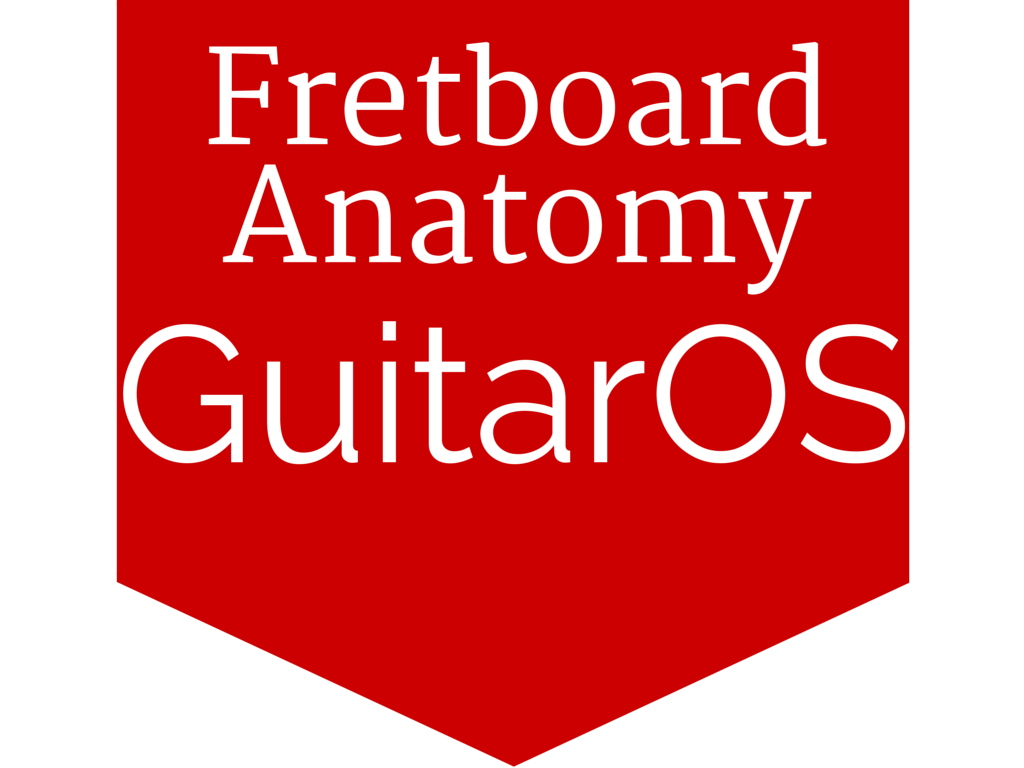 No surprise here but I’m partial to my own method, Practical Theory. It does what no other method does: updates your “operating system” first.

Learning the guitar like a real instrument is hard, but not if you do it in the right order. Think before ink.

Instead of trying to translate back and forth from your current shape-based understanding to “proper” music theory, GuitarOS teaches you to think about music in the same way that badass musicians do.

You can find Practical Theory here.

(And if you’re allergic to paying for guitar lessons, you can read a fairly detailed syllabus here.) 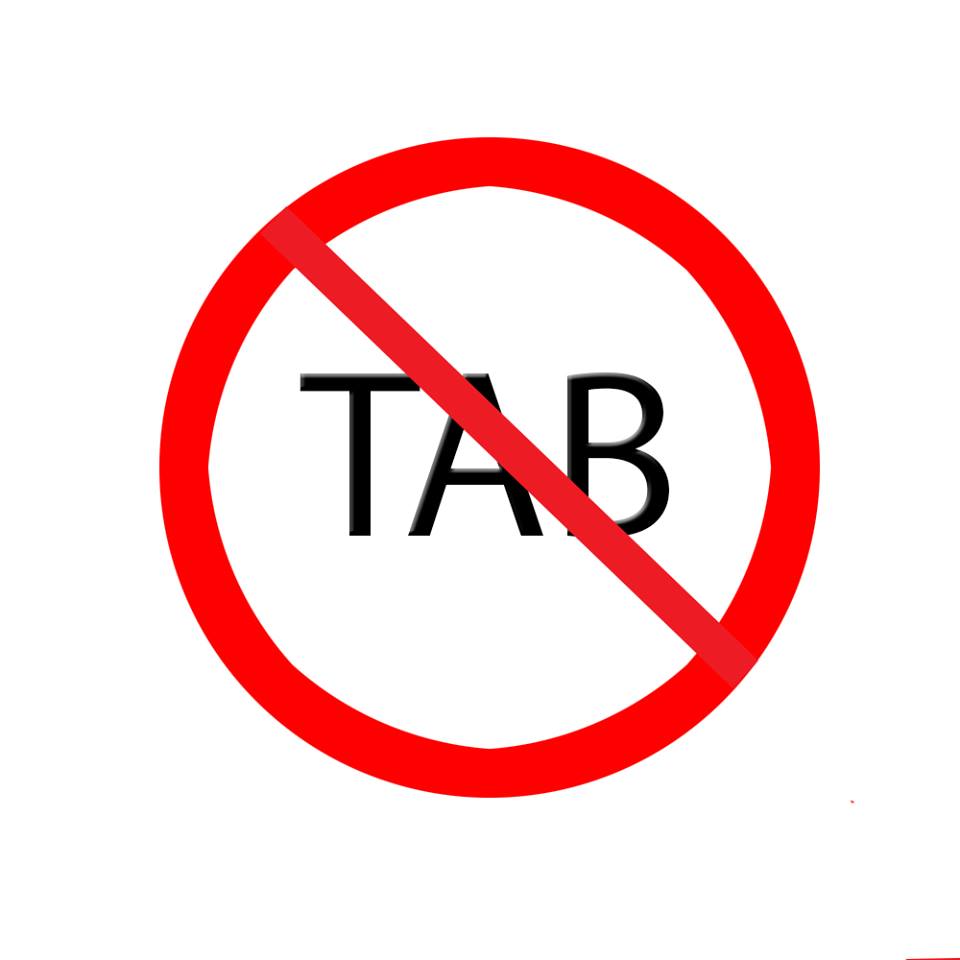 Eric Justen over at Guitar Smart Studio has a promising new series called No Tab Allowed. It’s still in its infancy, but I’ll be watching it closely. Eric is a beast on guitar and a badass sight reader too, so I’m keen to see his approach. 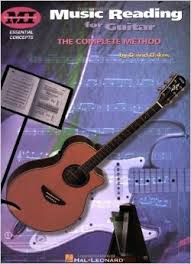 Years ago I worked through Music Reading For Guitar by David Oakes and since have taken a number of students through it as well. I like that the Musician’s Institute stuff tends to be geared towards the modern reality of working musicians. Even though the examples in the book are all drawn from classical music’s “hits,” Oakes successfully avoids the stuffiness (and the inevitable unemployability) of conservatory methods. 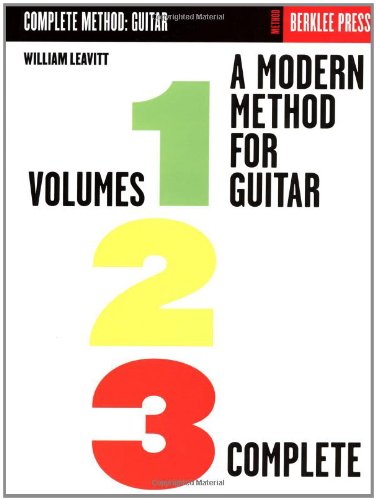 A Modern Method Volumes 1-3 by William Leavitt I enjoy for its flat-out pedagogical brilliance. At no point does Leavitt engage in excessive hand-holding, but at the same time he never assumes you know anything at all. Starting pretty much at zero, he has you doing fairly complex & sophisticated shit within the first 25 pages. 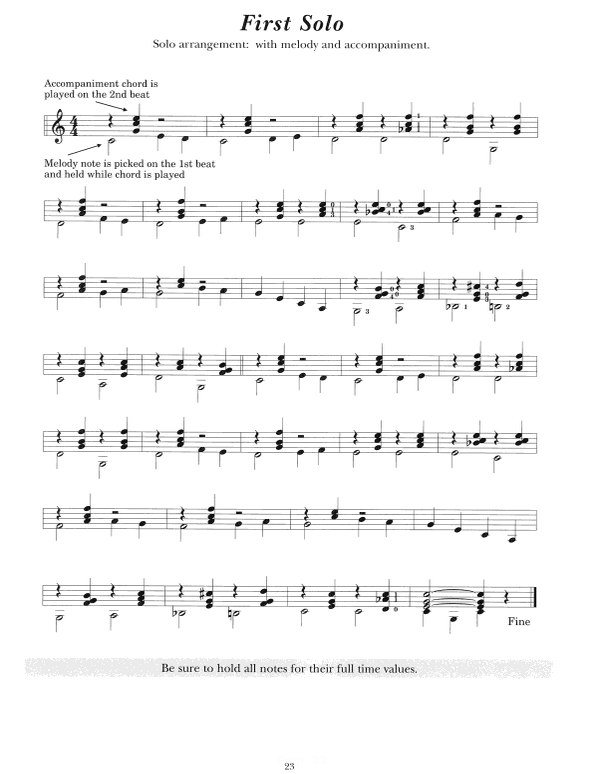 I’m currently running an experiment to see how long it takes to read through all three volumes in 5 minute increments.

It’ll probably take you slightly longer than me, but reading just one page each day, you could still knock back all 395 pages in 13 months.

Above all, it’s important to remember that (like jazz), even if you never get to be any good at it, reading music is tremendously useful in understanding how music works.

If you find yourself plateaued on the path to guitar badassery, I hope you’ll consider learning Guitar As A Real Instrument.

Even when you can already play some serious guitar, digging in to the why behind the music is fascinating, liberating, and inspiring.

It’s what Jimi did.